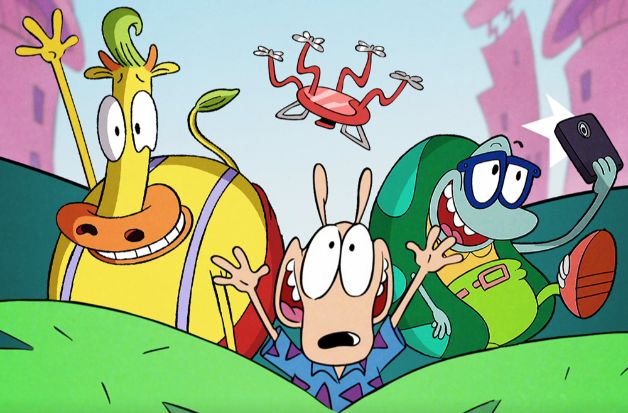 Nickelodeon’s programming during the 1990s was incredibly unique experience not only for the channel, but also for television as a whole. The 90s is a time when Nick decided to experiment. They tried out new ideas, new shows, and they rebranded themselves in a way that made them iconic. Nick is a channel that was able to dominate children’s television during this time creating some of the most interesting shows of all time, which in turn has helped to inspire new talent over the years. While times do change and new material arises from the old, the fans that grew up on Nick in the 90s are still ravenous for nostalgic content and with this need for more flashback content, Nick has decided to give in to those demands. They have announced a series of revivals, but one that has been an interesting property to make a return is the 90s  classic “Nicktoon” Rocko’s Modern Life.

If you are not as familiar, Rocko’s Modern Life was a cartoon that starred a talking Wallaby and his friends who go on multiple adventures while sending up events and concepts from the real world. It was a smart, funny, and irreverent show that made an impact on many people even if it isn’t as highly remembered as some of the other cartoons of the time. It was a great show and Netflix in association with Nickelodeon has released a 45 minute modern special called Static Cling. This reboot had no reason to happen, but surprisingly it not only lived up to the original series,  but it is also a brilliant reboot and an example of how to revive a show. With it just being released I feel like it is worth talking about because of how well it has handled its return in a mostly Non-Spoiler setting. Here is our analysis on why Rocko’s Modern Life: Static Cling is a perfect example of how to revive a property.

The first thing to note when discussing any piece of media is to have an understanding of how something is created. It’s important to see who made it and why it happened to come about. With this it is incredibly important to know that the original creator, Joe Murray wrote and led this project. It is not always feasible to have a creator return and in most cases when reviving or rebooting a property that doesn’t happen. It’s rare when the original creative talent returns and often times it can lead to a greater result in the quality of the work produced.

Joe Murray’s vision is on every frame of this special, which felt like a return to form in every way from the writing to the animation style. It didn’t at all feel out of place if you happened to be a fan and his perspective lent a lot of polish to it. It is obvious that Murray not only is a talented animator, but also a vision focused leader who knows how to execute in multiple ways. The only reason this special work as well as it does is because of him and everything that is brought to the table. While he obviously worked with an exceptional team, without his vision the show would just feel extremely different by comparison. This special is especially unique because of its insistence on staying wholly true to the original without attempting to ignore the changing times. This is most immediately felt in the technical aspects that were put into the show to make it look and feel like the original. Murray’s direction stems to the animation, which is handled in such a way that keeps the iconic look of the original series intact, while changing things to work in a more modern sense.

The animation in this special is gorgeous. The original art is wholly intact, while finding new ways to use digital art to enhance everything so that it looks much more modern. It beautifully straddles the line between the original hand drawn look of animation with the more modern, clean presentation. Its art style was a big draw to why it was successful and that same style is left completely intact. While there are differences between the old style of animation and the new style it doesn’t feel like any sort of drastic change other than enhancing it to be more applicable to a modern high definition resolution. In addition to the animation staying consistent the voice cast is exactly the same leading to excellent performances from the returning cast members, which doesn’t always happen.

While all of these components are important to the ingredients of creating an excellent looking and accurate revival there is a lot more to unpack in terms of the depth of the themes presented, which help  make a strong case for why it is one of the best reboots of any animated television property.

Rocko’s Modern Life was a show that never bowed out from discussing and analyzing things present in the real world. The original series is filled with so many adult jokes as well as legitimate satire that is still applicable even if a lot of it was criticizing the issues of the time. Static Cling takes what was done before and transplants it into modern day and runs with it throughout the whole season. While I don’t want to give away the plot, the story picks up 20 years after the original series ended where Rocko and his friends are lost in space. When a return to earth button is found on the rocket they blasted off in they hit it and are thrust back into their home town with everything having changed. The show takes a few minutes to parody modern concepts and ideas, but after that it settles in to tell a deeper story about change as its main theme, especially as it relates to Rocko and his next door neighbor, Ed Bighead.

I do not wish to spoil the special, but it is very important to talk about a specific concept that is beautifully handled. The theme of this special is about how things change and that change is a beautiful thing. It is important to love and respect your past, but it is also important to learn that change is inevitable and while it can be difficult in the end there can be some true beauty to that. With this being said The Bighead family in the original series consisted of Ed, Bev, and their son Ralph who is voiced by Joe Murray himself. In the original series there were a lot of moments with Ralph actively being an animator and dealing with a father who doesn’t understand him. Ralph left at the end of his character arc to go find himself. With the return of the show it is revealed that in the time that Rocko has gone to space Ralph has transitioned and has found true happiness with her new identity as Rachel. She is a Transgender woman and the transition is surprisingly and beautifully not played for laughs. This is a groundbreaking moment for animation as Rocko and most of the characters react to this change without laughter or disapproval, but by finding it to be exciting because she is happy with who she is. That show of love and understanding that Rachel is happy and the acknowledgement of the main characters understanding is incredibly rare for media representation of Trans people. Joe Murray specifically mentioned that they worked closely with the organization, GLAAD to depict this as sensitively and correctly as possible and they nailed it.

While this is a massive step forward for children’s animation it is also an incredibly poignant addition to a plot centered around change. Ed Bighead is the only character who isn’t accepting of Rachel, but it’s not about not loving her. It’s about his fear of change being inevitable with the potential to lose his house and the return of Rocko. This change is hurting him deeply, while Rocko coming back to Earth has his own issues with change. He is upset that things aren’t what they were when they left Earth and that his favorite series is no longer on the air. Their struggles with accepting differences is contrasted with Rachel being happy with who she is. She is the beacon and symbol that change is good and can be healthy.

These deeper layers to a seemingly silly show really make this special go beyond just being a revival for revival sake. These themes of change shown with heart, while also being satirical is why the show worked in the first place and why this revival has been as loved as it has been.

Rocko’s Modern Life: Static Cling feels like an extended episode at 45 minutes. While this could be seen as a negative, I found that time limit to actually benefit it immensely. It was able to not only bring back the world and the characters accurately, but it changed where it needed to and told a concise story that had heart, humor, and acceptance. I stand by my thoughts that this special has no right being as good as it is. It is easily one of the best reboots I’ve ever seen and I will definitely be watching this again. It deserves the praise it has gotten and I hope that this sparks them to create more specials with just as much heart, passion, and representation as this one had. If you have yet to see it then I highly recommend you check it out on Netflix.