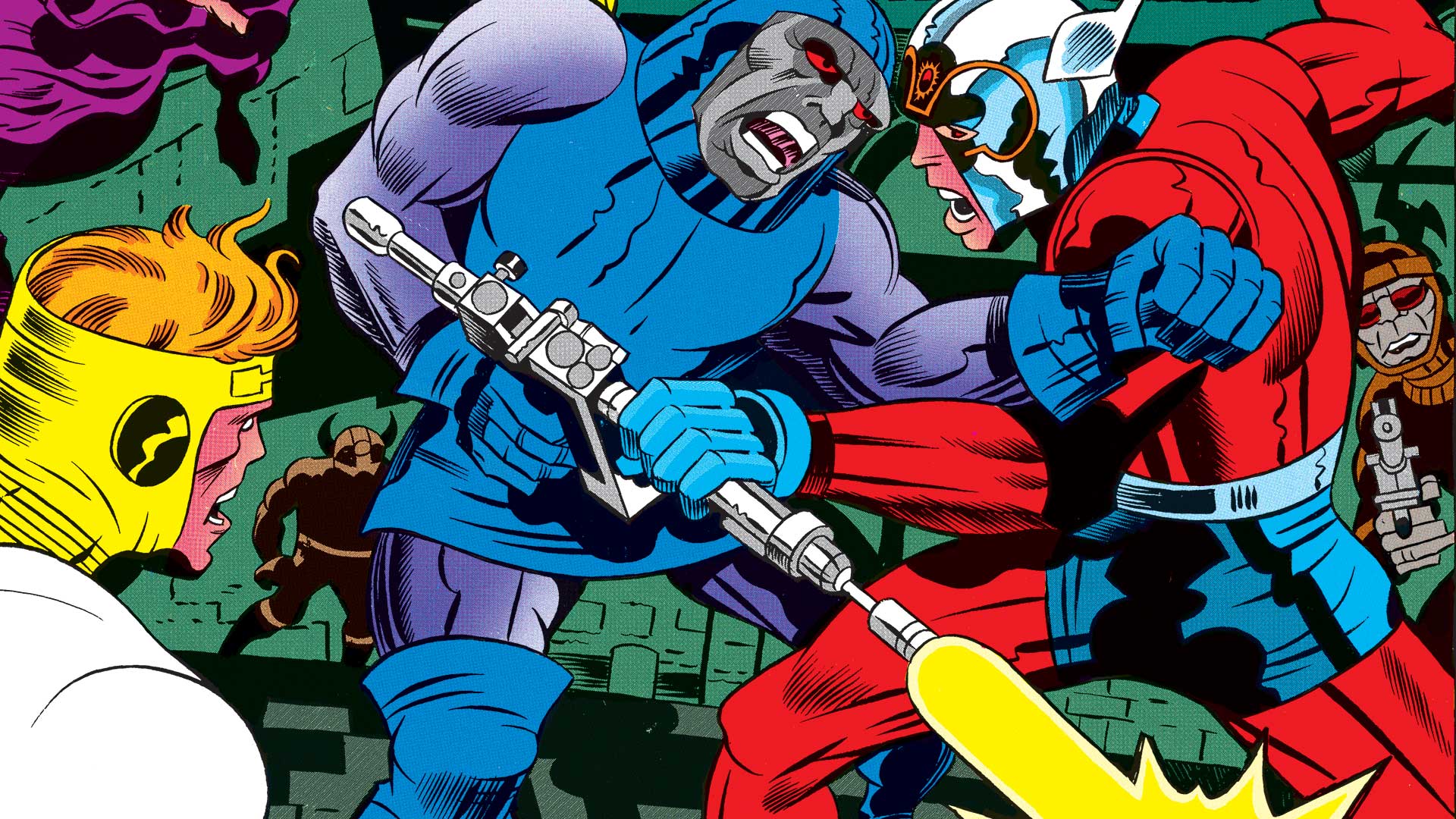 When thinking about the upcoming projects that DC is working on in Hollywood there is a massive list on the tip of everyone’s tongue right now: you’ve got Patty Jenkins’ Wonder Woman sequel: Wonder Woman: 1984, there’s James Gunn’s Suicide Squad, there’s Matt Reeves’ The Batman (Working title Vengeance), and still we have Black Adam, SHAZAM! 2, and an Ezra Miller The Flash movie that is said to be based on Flashpoint Paradox. So with all these names flying around, there is one project that, when you think about it, is just absolutely MASSIVE that is being overlooked and forgotten. I am speaking of Ava Devurnay’s New Gods with the screenplay written by Mr. Miracle writer, Tom King.

Outside of a minor update given to us at NYCC 2019 (New York Comic Con), there has not been much released about this movie. All we know is that Ava Devurnay has been reading up on her Jack Kirby’s 4th World books and that Tom King has stated that this story is going to be super personal, which honestly makes me a bit nervous given how his run on Batman ended. That being said, with so much left to speculation, I figured it would be fun to compile my dream cast for this film.

The first character that I want to talk about it a character that I feel that is never given the spotlight he deserves despite being essentially the protagonist of Jack Kirby’s stories, I am of course talking about the Dog of War himself, Orion. It’s funny because Darkseid has become this massive staple of DC, serving as a constant threat to the League and Superman, but Orion so frequently gets left behind, and I feel a lot of that is because Orion is a dick and is not a conventional superhero. Orion’s rough edges are in no small part the reason I love him as a character. His hatred for Darkseid is the driving force of his character narrative, and his heroism is directly linked with his need to defeat Darkseid. That being said, Orion will frequently put standard heroic values at risk to kill his father, and this makes him a character that toes a very fine line between hero and villain. For Orion, there has only ever been one actor who I ever envisioned in my head, and that actor is Kevin McKidd.

My first exposure to McKidd was in the HBO Original series Rome. In the show, McKidd plays one of the protagonists, Lucius Vorenus, a centurion in Caesar’s 13th Legion who, after returning from Caesar’s Gaulic Campaign, discovers that there is a new baby in his house that either belongs to his wife or his daughter (watch the show to find out). McKidd’s Vorenus in the first season was exactly how you’d expect him to be: rigid, authoritarian, a traditionalist with a need for order, which right off the bat does him well for this role. However, the moment that sold me on him as Orion came in much later in the series. In this scene, he has been tasked with undoing a mess he made and ringing in all the crime lords of Rome. During this, he displays his normal calm and controlled demeanor, until the very end where he takes a statue of a patron goddess, breaks it across a wall, and declares himself a son of Hades. This kind of anger hidden beneath the calm is something that is needed for Orion. After all, Orion is Darkseid’s son and if Orion inherited anything from his father directly, it’s his penchant for ruthlessness and hidden temper.

After talking about Orion there is only one direction to take this wishlist, Darkseid. Honestly, there is only one Darkseid for me and that is Michael Ironside. He voiced the character throughout the animated Timmverse, and age has only grizzled the actor’s voice which would add so much more to a performance as the lord of Apokolips. As a veteran actor of badass authoritarian characters like Lieutenant Rasczack from Starship Troopers, and of course, his tenure voicing the character, Ironside is the perfect person to bring both the voice and physical performance required for the character. Michael Ironside may only be 5′ 10″, but with the magic of Motion Capture turning him into Darkseid would be an easy feat, I mean Josh Brolin is actively the same height, and his Thanos was great!

With the Lord of Apokalips put forward, it’s only logical that the next on this character list be none other than the High Father of New Genesis. My pick for this is none other than Ian McShane. Ian McShane is a stage actor with an immense range that oozes charisma. While he has earned a reputation playing fairly ambiguous characters, McShane would be a fantastic asset for this film, and in addition, his facial features look like a Jack Kirby drawing. Lastly, the man can rock a beard, and having played Mr. Wednesday, or Odin in the American Gods show on Starz, the step to Highfather from Allfather would not be a massive one.

We started this piece with Orion (son of Darkseid), and having talked about both Darkseid and High Father, the next step would be to talk about the son of High Father, but you can’t JUST talk about Scott Free (Mr. Miracle) without talking about his femme fatale wife, Big Barda. Up until a few months ago, this casting was actually quite difficult for me. I had some ideas on who I’d like to play Mr. Miracle, but finding an actress that fit the bill and could play well off said actor was easier said than done, but then Disney+ released The Mandalorian and my debacle was solved. Pedro Pascal and Gina Carano are my castings for Mr. Miracle and Big Barda. Pedro Pascal’s range as an actor cannot be understated, however, his portrayal of the flamboyant Red Viper of Dorn from Game of Thrones is really what makes him perfect for this role. Scott Free is an Escape artist and theatrics are the focus of that trade, and Pascall has those in spades. There’s not much that needs to be said about Gina Carano, as an MMA star turned actor, she’s a badass that can actually present Big Barda’s persona while simultaneously being more than capable to dish it out and do her own stuntwork. While Carano might not be the 7 ft titan Barda is in the books, some things, like an actor’s ability to represent the essence of a character, should come first. Plus if Peter Jackson could make us believe Johnathan Rhys Davies was a dwarf in Lord of the Rings using camera tricks, I think that they’ll be able to figure something out.

With Big Barda and Scott Free being put out there, Granny Goodness is the next logical step. Honestly, I am not going to spend to much time talking about this casting because honestly she’s been put on every fancast list there is, and for good reason. American Horror Story veteran Kathy Bates is honestly one of the very few examples of what can be called perfect casting. She looks like Granny, her role in American Horror Story: Apocalypse is literally Granny Goodness with a satanic spin, and she’s just a fantastic character actress.

With Goodness on the list, all that is left are the minor characters like Desaad and Kalibak. For Desaad I would pick Watchmen actor Jackie Earle Haley, his work as Rorschach in Snyder’s Watchmen speaks for itself, and his gravelly voice would lend itself perfectly for Desaad. For Kalibak I would pick Underworld actor Kevin Grevioux. Grevioux has a lot of things going for him in that his a hulking man with a ridiculously deep voice that is almost animalistic in nature, making him the perfect choice for Darkseid’s other son.

Anyways I hope this list has been a fun read, and maybe some of these names link up with other people’s hopes as well! I know I didn’t put much of the New Gods in there, and that’s because I honestly don’t have any specific thoughts on those. The focus of New Gods as a property has always primarily been on the ones that I have mentioned. I am sure some people are going to be mad that I didn’t list Metron, but I personally believe that Metron shouldn’t appear in a first film and should be a character whose presence is felt but not shown, as that’s kind of the role he plays in the books. Thanks again for taking the time to read this titan of an article!

Marvel’s ‘Black Widow’ Becomes Most Recent Coronavirus Victim as Premier Gets Delayed
Is ‘The Flash’ Having One Of Its Best Seasons Too Late?