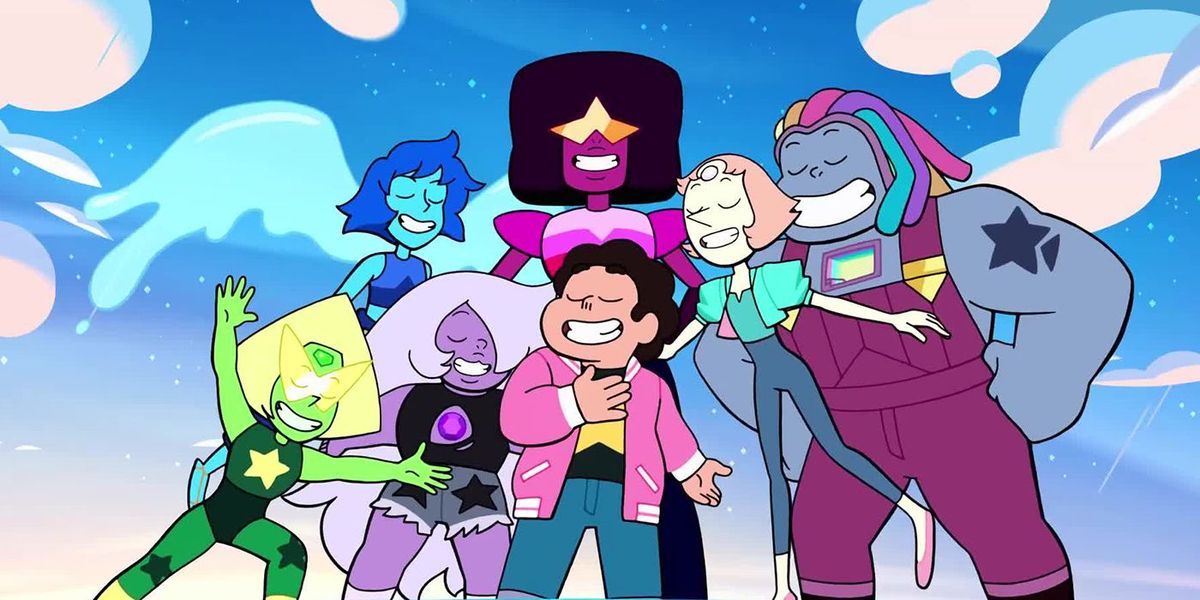 We are living in an excellent time for family oriented Animated television. There is a lot of great content being created whether it be on streaming platforms or on cable television One of the biggest and most well-known networks still airing quality content is Cartoon Network. It is a network that has been willing to push the boundaries in all forms of animation and they have continued to do so with one of the network’s most creative and popular shows of all time, Steven Universe. After 7 years of entertaining and enlightening both children and adults the series has finally come to an end this last weekend with the emotional final moments of Steven Universe: Future airing. It is a big series ending and for many people it has been an extremely meaningful show in their lives. The lessons that have been exemplified in this series are incredibly important which is why to send off this show properly it is a good time to look back at Steven Universe and analyze what it has taught us over the years.

The biggest and most prominent lesson that it has consistently worked on since its inception is one of acceptance and inclusion. The show consists of multiple different types of characters from multiple backgrounds and a lot of what many of the characters struggle with is understanding the perspective of others, but Steven and the Crystal Gems are at the heart of the series and understand that the best way for things to be better is to accept people regardless of who they are or who they love.

The series has done a phenomenal job with LGBTQ+ representation on television, which is something that not too long ago most children’s television would be too scared to cover in any meaningful way. The show purposefully gave us quite a lot of characters who didn’t fall into heteronormative guidelines. Characters also weren’t expected to fit squarely into the gender binary. They were often shown as expressing themselves in both feminine and masculine ways, which was also sometimes simultaneous. There was no judgement from any of the main characters. No hatred thrown at characters for their own unique identity and sexuality. It was all about love and acceptance of those differences, which is a powerful message to deliver. Imagine being someone who is so used to the media looking down on you for who you are or happen to love. There’s been quite a history of Media punching down and while there is some great progress being made, it often isn’t enough. What makes this show different is from day one it has been actively pushing for greater representation in this department and by doing so  it teaches us about the concept of acceptance and how important it is for us to look beyond our own internal biases to the humanity present in those who happen to be different.

If there is anything to take away from this show it has to be the fact that because of its greater representation and because of its insistence on showing all forms of people it has made us look at those around you with a more caring perspective. The show has fought to teach its audience how accepting others for their differences is a beautiful thing. It’s not about erasing those differences. It’s about making a better world that is accepting and understanding of the beauty that makes us all unique individuals. Those traits whether it be our race, our gender identity, or our sexuality make us special and that should be celebrated without treating people differently.

One of the most interesting and relatable struggles present within the series and especially towards the end was the struggle with individual and interpersonal relationships. Steven often was put into a particularly precarious place on more than a few occasions with understanding his relationship to the idea of who his mom was and why he felt the need to understand more. The little he found about her came from the Crystal Gems around him who often had a more unhealthy connection to what they loved about her. The character Pearl in particular had an almost unhealthy obsession with the love that was never really reciprocated her way. She held onto that promise of romantic love from a woman who didn’t feel nearly the same way about her and held resentment towards her for doing so. These examples are just some of the many pain and frustration the characters lived with in toxic interpersonal relationships.

When dealing with a topic as heavy as toxic relationships in a show that is essentially made for families it is difficult to find the balance between explaining it in a way that children can understand, while dealing with it in a mature and fairly realistic portrayal. It is a difficult thing to do well, but incredibly this series does so with seeming ease. They constantly introduced new characters and storylines that intentionally gave vivid examples of people in unhealthy relationships whether it be with other people platonically, romantically, or even with themselves. There were quite a lot of moments where it was harrowing and people were constantly being abused either physically or emotionally by people that they cared about or were used by. It was often heartbreaking to have these clear examples presented in a series that tries to touch on this with a light hand. Steven Universe: Future in particular dealt head on with themes of loneliness, and giving oneself over to others without taking care of yourself. These moments were incredibly powerful and they were excellent at being able to serve in place of real world lessons that needed to be taught.

Understanding the health of the relationships we foster is an incredibly important lesson and Steven Universe understood the truth to this. The series knew when to hit you with harsh truth and when to comfort you. It taught us to be wary of the people we love and hold them close without putting their needs always above our own, which is something that many of us struggle with when wanting to feel loved and needed. This understanding of the company we keep stems from the emotional turmoil we often find ourselves, which the show handled beautifully.

Your Emotions Are Valid

A universal issue that is often ever present and sometimes exacerbated by societal pressures is that one’s own emotions aren’t properly handled. So many people struggle with understanding that giving space to feel those emotions is a healthy step in dealing with internal issues and conflicts. Some people especially in toxic spaces can often turn on others while not dealing with one’s own problems. Steven Universe tackles this issue head on in so many crucial ways.

The series is incredible at dealing with emotions through multiple perspectives. The vibrancy of a family oriented series helps to clearly and softly present characters who are forced to overcome and deal with emotions. Due to societal pressures it can often be expected to bury how we feel and that emotions are supposedly a sign of weakness, which is such an ignorantly unhealthy attitude to fill into people’s heads. The final season dealt with this by giving Steven a series worth of issues that he carried around with to deal with. Steven and the Gems were always open about how they felt with both masculine expressing and feminine expressing characters equally cried and allowed themselves to feel things. The show never talked down to a character for feeling the need to cry and in ways the series expected its audience to not only understand this, but internalize the validity of one’s own emotions. They are valid and whether or not you get emotional has nothing to do with who you are. You are not weak for expressing your own truth. With as much posturing as people do we all need to express and release the fears, sadness, pain, and happiness inside us. The full spectrum of emotions are presented on the show as being the truth to defeating any issue you may have to deal with and that is a powerful message to send to everyone that is currently struggling with expressing themselves and letting everything bottle up.

The great care at which the characters are given while expressing their true emotions is masterful. With enough empathy shown to them we are forced to be in their shoes and by doing so gives those of us with emotional issues an outlet for expressing the truth. Even those who don’t have issues can learn to treat those that do with a softer and more empathy driven approach. This show has taught and reinforced this perspective multiple times, which is one of the reasons why this show has had such a huge impact on people the World over.

While the series may be over the lessons that Steven Universe presented will live on way beyond the limited time we had with the show. I know that many people have changed as the show progressed and I’d like to think that I’m not alone in having learned more empathetic traits because of its ability to understand healthy relationships, preach acceptance, and give us the space to express our valid emotions. These lessons are crucial to us, which is why Steven Universe’s final moments were so special to so many people. I know I will greatly miss the show, but it was able to give us a satisfying and meaningful conclusion to one of the best animated shows of all time, which is extremely impressive.