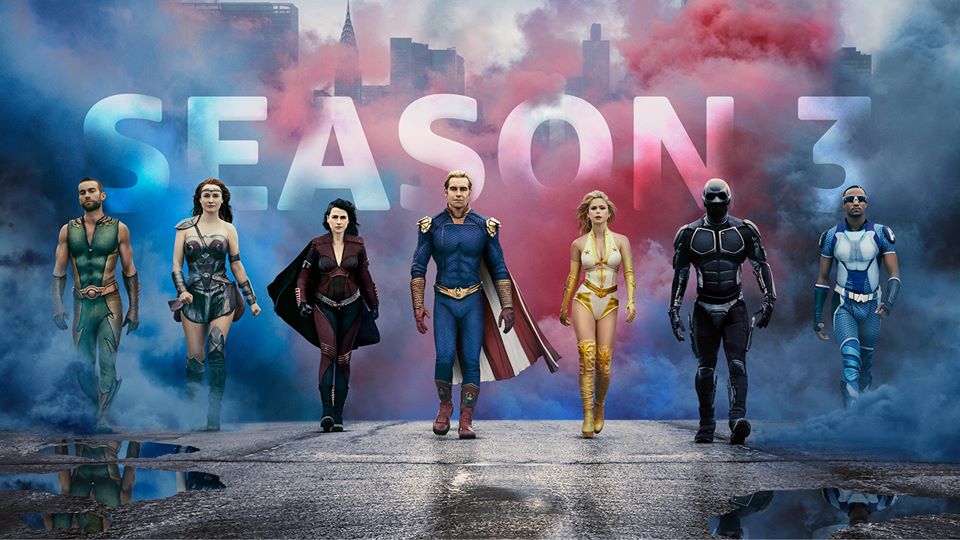 Amazon Studios today announced it has officially ordered a third season of its hit series The Boys, co-produced with Sony Pictures Television, ahead of its highly anticipated second season debut on September 4. The announcement was made today during The Boys Comic-Con@Home Panel. Additionally, it was revealed that Emmy Award-winning host Aisha Tyler will serve as host and executive producer of the official The Boys aftershow Prime Rewind: Inside The Boys. In each episode of Prime Rewind: Inside The Boys, members of the cast, creative team and other special guests will join Tyler as they dissect the events that unfold in each episode.

“Amazon, in a bold and historic push to expand their ‘weirdo’ demographic, has greenlit Season 3 of The Boys! The writers and I are hard at work in the (virtual) writer’s room and we’re sad to say, the world has given us way too much material. We hope to be shooting in early 2021, but that’s up to a microscopic virus,” said showrunner and executive producer Eric Kripke. “As if that wasn’t enough, we’re bringing you a Season 2 after show, Prime Rewind: Inside The Boys. Double entendre intended. Hosted by the incomparable Aisha Tyler and guest starring the cast and crew, it’s a deep dive into how we make this insane thing. Seriously, thanks to Sony, Amazon and the fans. We love making this show so much, and we’re thrilled we get to make more.”

“Eric Kripke and the incredible cast of The Boys continue to deliver a wild and action-packed series full of surprises and can’t-miss moments that have made the series a global hit,” said Vernon Sanders, Co-Head of Television, Amazon Studios. “We couldn’t be more excited to see where Eric takes The Boys and The Supes in Season 3, and to have Aisha Tyler join The Boys family as the host of Prime Rewind: Inside The Boys.”

Jeffrey Frost, President, Sony Pictures Television Studios added “The Boys is unlike any other show on television. It’s incredibly entertaining and compelling and elevates genre programming to a whole new level. We’re very excited about Season 3 as we know Eric Kripke and this incredibly talented cast are going to raise the bar even higher. And Prime Rewind: Inside the Boys is the perfect show to bring it all home!”

Aisha Tyler added, “The Boys is one of the smartest, most irreverent, unapologetically badass shows streaming. I became a fan during Season 1 and this season I’m stoked to be flying fans into the heart of the show as host of Prime Rewind: Inside The Boys. Season 2 is bigger, badder, and more audacious than ever before, so join me after every episode as we dig through the rubble pile of our feelings. I promise, we’ll get through it like The Boys — dysfunctional, but together.”

The even more intense, more insane Season 2 finds The Boys on the run from the law, hunted by the Supes, and desperately trying to regroup and fight back against Vought. In hiding, Hughie (Jack Quaid), Mother’s Milk (Laz Alonso), Frenchie (Tomer Capon) and Kimiko (Karen Fukuhara) try to adjust to a new normal, with Butcher (Karl Urban) nowhere to be found. Meanwhile, Starlight (Erin Moriarty) must navigate her place in The Seven as Homelander (Antony Starr) sets his sights on taking complete control. His power is threatened with the addition of Stormfront (Aya Cash), a social media-savvy new Supe, who has an agenda of her own. On top of that, the Supervillain threat takes center stage and makes waves as Vought seeks to capitalize on the nation’s paranoia.

Prime Rewind: Inside The Boys, executive produced by Michael Davies, Aisha Tyler, Julia Cassidy, Eden Sutley and Jennifer Ryan, will debut on August 28 with a look back at season one and continues on September 4 to dive into each episode of Season 2 as it rolls out through the October 9 season finale. Amazon Studios, Embassy Row and Sony Pictures Television produce the companion series.

Prime members can stream The Boys exclusively via the Prime Video app for TVs, connected devices including Fire TV, mobile devices and online. Members can also download it to mobile devices for offline viewing at no additional cost to their membership. The series is a global release and available at amazon.com/TheBoys for Prime Video members in more than 200 countries and territories.