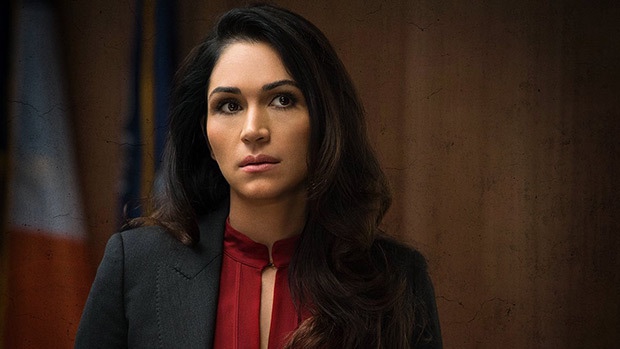 With Power spin-off Power Book II Ghost recently premiering on Starz, the Power Universe has grown significantly, with new characters and all new story lines, which I’ll be writing about in an upcoming article,but before we move onto this new corner of the Power Universe I wanted to take a look back at a major character from the Original series that began it all, Angela Valdes.

(spoilers for the sixth and final season of Power follow)

The end of the fifth season finale for Starz crime drama, Power, saw series regular Angela Valdes shot in the chest by fan favorite character Tommy Egan, After Angela dove into the path of the bullet to save the series central figure, Ghost. Season six opened with Angela being rushed to the hospital only to die on the operating table. Angela’s death was a shock to many fans, some were left unsatisfied with the tragic end for Angela, others were excited to see the series have its highest stakes yet. I personally felt there was a bit more story to tell with Angela.

Angela Valdes was a character that always had an issue dealing with her own morality. For the majority of the series Angela is a federal Prosecutor who is dedicated to catching the Biggest drug distributor in New York City, whom unbeknownst to her is none other than her love interest James St. Patrick. In the early seasons of the show Angela has some brushes with the dark side when trying to catch criminals, be it gathering evidence in an illegal manner, or using a pedophile as a criminal informant, Angela was willing to use darker means to succeed,a trait she shared with her love interest, James “Ghost” St. Patrick.

Angela’s moral compass is further tested when she discovers James is Ghost, the Drug Distributor she has been chasing for months, at first wanting to take Ghost down she eventually decides against it in favor of having a relationship with James, as long as he gives up being Ghost. Angela even goes as far as to betray a friend and colleague to protect James. After, her and James relationship ends after he is forced to once again become Ghost and sell narcotics, and Angela is forced to work against her own office after Ghost uses information from Angela to commit a murder. In the Season finale of the third Season, Angela wrongly believes Ghost has killed one of her colleagues and has him arrested, putting her duty and sense of Justice above her love for Ghost. In season four, Angela slowly discovers Ghost had nothing to do with the murder of her friend and works to prove his innocence. Following these events Angela works to discover the identity of the man who really killed her colleague Greg Knox and have him arrested, which she eventually does, although she later secretly slips information to Ghost and his cohorts of his whereabouts so they can have him killed. Angela does this for revenge and because this person had incriminating evidence against her regarding her time helping Ghost.

In the series fifth season Angela goes from occasionally helping Ghost and his criminal family to becoming a full on accomplice after she helps to cover up a murder committed by Ghost’s son. Angela even goes as far as to set up another man for the murder. In this season, she is constantly giving into her darker impulses out of a sense of love for Ghost, while still attempting to stop other criminals as a federal prosecutor. These two lives she’s living collide when her co-workers discover she is an accomplice of Ghost in the season five penultimate. She is given the option to give evidence on Ghost and his accomplices to save herself, but in the season finale Angela instead fully joins the side of Ghost and his family, enacting a plan that will help them all elude charges from the authorities. The plan works but Angela is unfortunately caught up in the brewing war between Ghost and his best friend Tommy and is fatally shot saving Ghost. Angela dies as soon as she is finally forced to pick a side, it would’ve been nice to see her have to deal with the consequences of losing her law license and being seen as a criminal by her friends and co-workers. We could’ve seen a reverse of Ghost story line from season three, where he attempted to go fully legit and it had disastrous consequences, Angela’s full embrace of a criminal life style would’ve surely wreaked havoc on her day to life and could’ve been and interesting plot point for the final season of Power.

Keeping Angela alive for the final season wouldn’t just have serviced the characters own personal story but the story the writers were telling in the final season as well. The beginning part of season six had Tommy and Ghost go to war over the death of Angela, with promotion for the series even promoting “Team Ghost Vs Team Tommy,” the only problem being Ghost never has much of a team throughout the season. By the time the war with Tommy kicks off most of the characters in the show hate Ghost, with Ghost’s only confidant being Joe proctor his Lawyer, who is killed off five episodes into the season. Tommy on the other hand has various gangs behind him along with his drug connects forces to back him up. Angela and Ghost have been shown to be a formidable pairing in the past, together their wits and skills would be enough to plot against Tommy and his criminal organization, and with Tommy having shot Angela in his attempt on Ghost life, she would have the perfect motive for fully embracing her darker impulses.

Do you think Angela was gone too soon? and would you have liked to see her alive in the final season of Power? Or were you satisfied with how the writers concluded her story? Let us know in the comments and as always thank you for reading!

Also be on the lookout for my upcoming article on the premiere of Power Book ll: Ghost