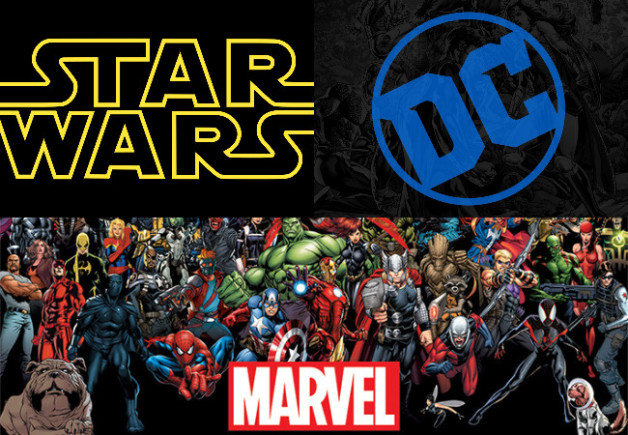 It is a great feeling of being a fan of something. We are all fans of different things and that can stem into being part of a fandom. While some people are fans of sports others are fans of different forms of entertainment that include video games, movies, shows, and comics. All of these forms of mediums have certain properties that create different sects of fandoms. Many of us including myself fall into several including the enjoyment of Star Wars, DC, Marvel, and any piece of pop culture you can think of. It’s such a wonderful thing to be a fan of something and to spread your joy of that particular property to other people. It’s a great thing to share your passions. It’s a great thing to try to convince others to join your fandoms and it can be a healthy thing. It is essentially what Up Your Geek is all about. With all of that being said there is a massive dark side to fandoms because of the vast array of individuals that can enjoy said properties. These individuals all have different levels of maturity and stability when it comes to loving these properties and the internet to them is a great tool to show their disdain not only to other fans, but to the individuals responsible for the properties. These people often show no restraint when criticizing people. So much so that it can often lead to harassment, sexism, racism, homophobia, and death threats. This small, but vocal percentage of fans can often make the fandoms in general look awful. This is such an incredibly delicate, but important topic and there is no better time to cover it than right now.

The Toxic Side Of Fans

While terrible fans have been around since the idea of being a fan began the way in which it has been more direct with the people who create the mediums in terms of online abuse has gone up in the last several years due to the proliferation of  social media as a daily tool of so many individuals. One of the biggest examples that I remember clearly is what happened last year. Zack Snyder is the director of some of the most divisive superhero films in recent years and fans have taken to their sides whether it be of complete contempt for his work or complete adoration. While it’s understandable to have opinions on someone’s work and it’s appropriate to submit fair criticism it is also under the assumption that this shouldn’t be a personal attack, but fans have made it personal. When Zack Snyder had to step down from working on Justice League because of the suicide of his daughter a group of fans who hate his work took it upon themselves to flood social media with incredibly awful things including mocking his daughter and praising the fact that Joss Whedon would be taking over the direction of Justice League. These comments sickened me to my core because through social media these individuals had a false sense of anonymity and they took pleasure in the tragedy of someone else. The majority of said fans who took to social media to do this are supposed fans of superheroes. Superheroes are meant to be beacons of light in the dark and the heroes they so idolize would have found their actions truly disturbing.

It has also been a rough time for being in the Star Wars fandom as there has been a massive backlash to both Solo: A Star Wars Story and Star Wars: The Last Jedi. While it’s completely rational and fair to have criticisms or to dislike either film it is also unreasonable to harass someone because they were a part of something they have disdain for. Recently Star Wars actress, Kelly Marie Tran was faced with an onslaught of not only sexist comments, but mean and racist comments as well because these fans hated her in The Last Jedi. It led her to essentially leave social media due to the enormous pressure. With the newer Star Wars films the supposed fans are incredibly irritated and many of them vocalize that they hate the so-called “SJW” turn the series is taking by including women and people of color in important roles. The misogyny and racism in this fandom has been bubbling to the top and while this isn’t the majority of fans the actions of these people paints the entirety of the fandom in an incredibly negative light, which is unfortunate. In an even more recent example that has come to light Ahmed Best, the actor known for playing Jar Jar Binks revealed that he contemplated suicide due to the harassment and death threats he received for simply playing a character.

Rick and Morty is one of the funniest and most clever animated shows in recent years, but sectors of its fandom has taken the show in the completely wrong way with many fans missing the point of the series entirely. In a recent promotional event McDonald’s brought back their szechuan sauce due to it being mentioned in an episode of the show. When it came time to bring it back fans lined up at stores and it turned toxic in that fans screamed at employees and it became so bad that show creator, Justin Roiland had to speak on it on twitter. In a similar sense of fandom gone wrong another animated show, Steven Universe is a beautiful show about tolerance, love, and acceptance, but some of the fans have harassed a girl who created fanart so much that she attempted suicide. That’s a whole other level of toxicity that should not be tolerated. The above mentioned examples do poorly to reflect upon being a fan of anything geek or entertainment related. They all stem from deeply dark places and sometimes it can get dangerous. It almost seems nearly impossible to stop, but there are ways in which people can work to make these voices not so loud.

How To Combat Fandom Toxicity

The Toxic side of fandoms is very loud when it comes to online forums and social media, which has become a driving force of communication in the modern era where everyone is always connected online. It allows for toxic attitudes to fester in small pockets and have driven those extreme examples of fans to reach new levels ridiculous toxicity. With this extremism it tends to paint a bad light on so many people and for those good fans it’s hard to know what to do to combat the negative side of their individual fandoms, but there are ways in which you can celebrate your fandom while also being positive examples. One of the easiest ways in which someone can do this is by putting forth a positive message about why you like what you like and to express your dislike of those that often make everyone look bad. You can put forward positive messages into your community and if your friend group or community has toxic members you can choose to confront them in a way that teaches and sets a good example rather than getting into an argument. This discussion with others as to why their actions are wrong could make for change even if those that are the trolls don’t change you have a chance to set a positive example for everyone else by doing so.

The next big thing that one can do is make your voice heard. Take to the internet, go to conventions, and let your voice be seen that your fandom doesn’t tolerate that level of harassment of extremism. The way in which I do so by writing long winded articles is just one small part of doing so. The more you show not only other fans what you believe in and stand for the more the creators of said properties will take notice. One of the best things I’ve seen from fan groups is to organize charity events or even give back to those that deserve it. I’ve seen many stories of people dressing up as superheroes and going to visit children in hospitals. Those actions send such a positive message out that exemplify what superheroes and the mediums they love actually stand for. While not everyone has the ability to do some of these things and that the toxic people will always be there it doesn’t hurt to love what you love and let others know that you are a force for good in your community rather than a voice of chaos, harassment, and abuse.

Toxic people will always exist and they will always find a way to make others look bad in the process and they are definitely a horrible part of fandom their isn’t a way to rid the world of their overbearing presence. While that is a definite truth it doesn’t mean that it should be seen or treated as the norm. There is within fandoms great people who could easily campaign and use their passions to be positive ambassadors of geekdom. This is what Up Your Geek is truly about. Using our platform to spread love, diversity, creativity, and passion for the good of geeky fandoms everywhere. We hope you love reading what we do and I will constantly be working to be a positive force against those who try to do harm to others. I hope that in at least shedding light on the toxic side that the positive side can use their passions to make the negativity not as pervasive.