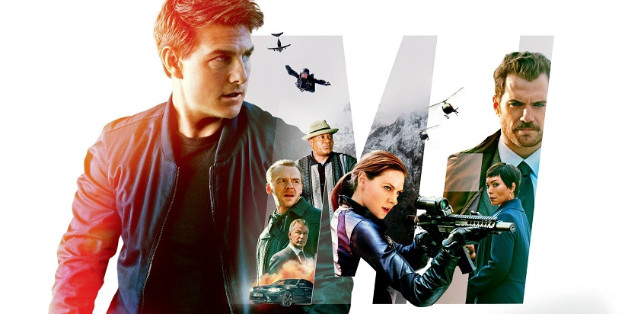 Mission: Impossible started its legacy as a television series in the late 1960’s and early 1970’s. It lasted a few years before ending it’s run. The brand itself was stagnant for many years until Hollywood decided to take a crack at rebooting it. Rebooting a property is almost always problematic. There is almost always trouble to bringing what worked on the small screen and inventing it all over again for the big screen. In 1996 the film, Mission: Impossible was released in theaters to a huge success taking in a lot of money and cementing Tom Cruise as an action star. That film not only changed the direction of Cruise’s career, but it started a major franchise that continues to be a huge success to this day. This past weekend Mission: Impossible- Fallout was released to not only universal critical acclaim, but also made it to the top of the Box Office. It’s the 6th entry in the franchise and is another step forward for this ever expanding and improving film series. There is certainly a lot worth dissecting in this latest entry and I was looking forward to the film, but what I didn’t expect was how great it really is. Here is my spoiler-free review of Mission: Impossible- Fallout.

The plot of the film is similar to the rest in the series in that it is complicated and layered so without spoiling here is a brief rundown of the main summary. It’s been two years since Solomon Lane was captured by Ethan Hunt and his crew, but a new threat is on the rise. There is a new organization known as The Apostles formed from Lane’s former group, The Syndicate. The Apostles plan to secure three plutonium cores via a new member known as John Lark. They plan to use these weapons to try to bring chaos to topple the system so that a new order can be reborn. It’s Ethan Hunt and his team’s mission to stop this plot before the plutonium is used to set off an explosion that could cripple the World. While on this mission Hunt is accompanied by a CIA agent named August Walker. With the help of his team Hunt is tasked yet again to save the World.

There is not a lot of information I can say without hitting spoilers, but the plot itself is one of the reasons why this film works so well. While it is yet another adventure about stopping terrorism it still manages to find a way to include more than enough interesting dialogue and moments of character development. The majority of the cast are present in this film and their characters all continue to shine even if some of them are in smaller roles. Ethan Hunt’s continued life in the game has shown repercussions and the film does a great job at highlighting this with the introduction of new characters that play a large role in the narrative that reflect Hunt’s character. It’s a well written plot that effectively moves the story between character moments and high energy action sequences.

The series has seen its fair share of talent come and go throughout the years with every film having a different director and creative team, but Fallout is the first film in the series to have a returning writer/director. Christopher McQuarrie led Mission: Impossible – Rogue Nation as the writer/director and made one of the best films in the series and he returns to not only do that again, but improve upon himself. His direction and writing matched up with some of the best fight choreography I’ve seen in a major Hollywood production make this film as special as it is. McQuarrie’s eye for the series and knowledge of the characters is on great display here. He is the perfect match for not only the often times comedic moments, but also the thrilling action and dramatic moments. Having a consistency in the filmmaker from the last film really did add to the quality of this film. He easily made the most thrilling entry in the series to date.

The cast involved in the film are also consistently excellent. Many favorites including Simon Pegg and Ving Rhames return in the roles that they have been playing for several films and their chemistry between each other is excellent. Tom Cruise leads the cast continuing his great portrayal of Ethan Hunt. He constantly brings a lot to the character and it shows in the stunt work that he’s willing to do. It definitely brings a sense of realism and excitement to the scenes he is in. The new cast including Henry Cavill and Angela Bassett are great additions to the already working ensemble cast that is these movies. The entire cast do great in their roles and hopefully we will be seeing more from them in future entries in the series.

On the technical side of the film it has some of the biggest and best scenes of stunt work for any Hollywood action movie in recent years. The fight choreography is phenomenal especially in a certain fight that occurs in a bathroom early on in the film. In addition to that the CGI use is there, but it’s not overused and it’s paired with excellent car chase scenes and stunt work that shows a lot of care and effort was put into it. This film has some of the best scenes in the series and definitely makes its mark in the action genre. Additionally the cinematography is breathtaking and that adds to the narrative conveying the multiple locations the film is set in.

I got the opportunity to see the film in a Dolby Cinema where the theater has some of the best sound I’ve heard in the theater. The film has a three dimensional sound  incorporated and when enjoying the film the sound made it seem like the action was occurring around the audience. The musical score is also great giving many of the films action sequences some more moments of tension. In addition to the original music the score effectively uses the iconic theme for certain moments and each time it is used it does not feel like a gimmick, but a trait that is needed for the series. It’s certainly a dynamically sounding experience as much as it is a great film to look at.

Mission: Impossible- Fallout is not only one of the best films of the year so far it is also one of the best action films in recent years. The narrative carried the film out in between the intense and beautifully done moments of action and stunt work. It’s one of those films that is an example to how action should be done in big Hollywood productions. If you are a fan of the series or if you love action movies in general I highly recommend that you definitely see it in a theater with a great sound system because it is certainly worth the experience.