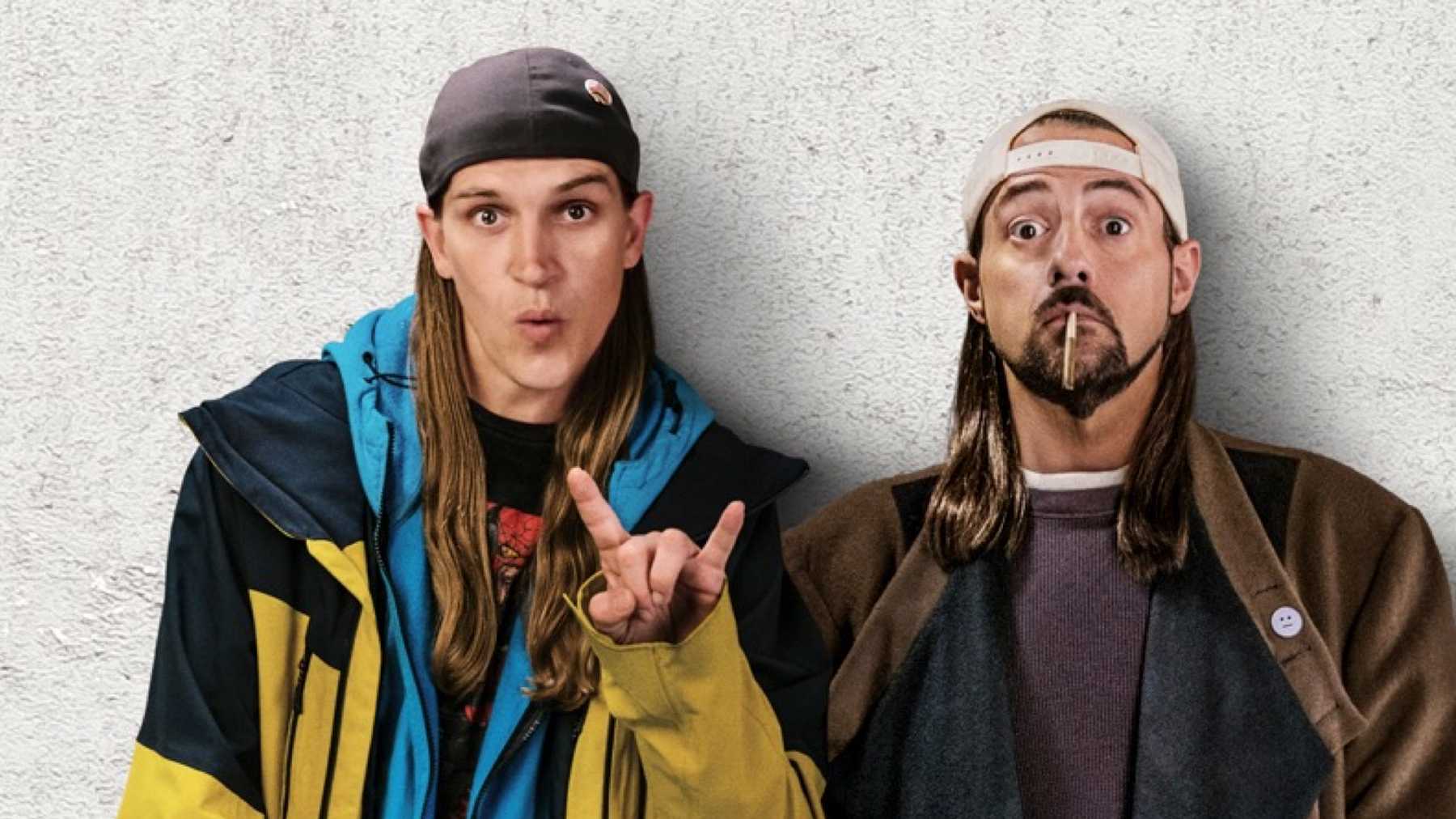 In 1994, a young independent filmmaker named Kevin Smith made a movie called Clerks and launched the start of a cinematic universe (before it was cool) that changed many people’s lives. So if you’re currently stuck at home looking for movies or shows to binge, I can’t recommend the View Askewniverse enough. For me personally, Clerks is one of the founding films that built me into a film fan.

The first film in this cinematic universe sets the tone of what’s to come. The plot is simple: two friends, Dante and Randal are just your average everyday clerks to work at the Quick Stop and RST Video respectively. All they do is talk about movies, love, the ins and outs of their day to day and that’s really all there is to it. As a young lad who was growing up in the 1990’s, I remember it well, it was a Friday night and I was hitting up a Blockbuster video store, I was going to order some pizza later that evening and have a friend or two over. I saw this VHS tape with a group of people in black and white on the cover. The title read “Clerks”; the back of the VHS box sounded a little boring to be honest. But after watching the film for the first time, I got it. The way these characters were written and talked to each other were exactly how my friends and I talked to each other. Their job was very boring but they made the best out of it, which taught me a important lesson: No matter what you end up doing for a living, just make the best out of it and do what you can and good things will come. It was hilarious and it felt real enough to where I believed during that hour and a half (give or take) I was just hanging out with my new buddies, Dante Hicks and Randall Graves and of course Jay and Silent Bob.
Mallrats

After Clerks became a hit, and resonated with audiences, Kevin Smith made a follow up film, titled Mallrats. But this time, Dante and Randall are not in this story. Instead, it tells the story of Brodie and TS who were both dumped by their girlfriends and decide to hang out all day at the local mall to take their mind of things. Going back to my childhood self-discovery of this movie: Again I am in the video store looking at the titles and I come across Mallrats. I saw that it was directed by Kevin Smith (that kid who did that Clerks movie that I loved). So I picked it up to see what he did next. I ended up loving the film, my friends and I would hang out at the mall all the time, so we really loved the setting. Like Dante and Randall, Brodie and TS seemed like real people, people I would hang out with. Now while this doesn’t follow Dante and Randall, it is in the same universe as Jay and Silent Bob are our connecting characters (as well as a few references) So far Kevin Smith is 2 for 2 with me.

The third movie of the View Askewniverse, Chasing Amy tells the story of Holden, Banky, and Alyssa. A comic writer meets a woman and falls in love with her, the problem is, she’s a lesbian. The writing in this one is fantastically brilliant. The tone remains the same as Clerks and Mallrats with the crude humor, love for comics and film, and characters you could relate to. but this one moves more into the drama genre more than comedy. This is the film Kevin Smith proved he was more than just weed and fart jokes. His writing together with the performances he was able to pull from his actors in this film seemed amazing to me. And spoiler alert- Jay and Silent Bob make an appearance in this movie along with some more references and name drops to connect to the same universe. And I personally love the way Kevin Smith brings back the same actors to play different characters in the same universe

The next movie, Dogma follows Bartleby and Loki as they travel across country to get to a passage that will get them back into Heaven. Meanwhile, Bethany meets Jay and Silent Bob and they embark on a journey to stop them. While Chasing Amy brought the usual great comedy and with relatable characters inside a dramatic film, he does the same thing in a religious movie. At the time this was being released, as you can imagine there was some controversy around this movie and people trying to boycott it, but what makes this movie fun is yes, it touches upon some sensitive issues (things that are still issues today) and makes it a really entertaining, road trip. If I’m being honest, the first time I saw this movie, I wasn’t sure how I felt about it. I had a good time watching the flick, there were just something about that didn’t sit right with me. But the second time I watched it; I felt a lot about the movie. I respected that Kevin Smith felt comfortable enough to take the risks he took with this movie. Now I love revisiting it

Jay and Silent Bob Strike Back

So, while Jay and Silent Bob have been our two characters to cross over with each Kevin Smith movie thus far, it was time to give these “clown shoes” their own flick. This tale is about our two favorite stoners, Jay and Silent Bob, traveling across the country to get to Hollywood to stop them from making a movie about Blunt man and Chronic (their comic book alter egos) And man, what a blast this movie is. At this point, with four movies to his belt and each one having a big impact on my life in some way, shape, or form, Kevin Smith wanted to expand the world just a little bit more and try a few new things. Bringing back almost everybody from this cinematic universe so far, and introducing us to a handful of new ones, and all the fantastic cameos and fourth wall breaking in this movie, it makes for a tremendously hilarious and entering outing for the boys.

Kevin Smith brought us back to catch up on Randall and Dante have been up to. They are now working for Mooby’s (which appeared in the last couple films) and it feels like we never left these guys. In most ways, they’re the same young fellas who worked at the Quick Stop but in some other ways they have grown. And it just reminds how invested Kevin Smith and the audience are invested in this world and these characters and we get some of the best writing and directing Kevin Smith has ever given us. Not much I can say that hasn’t already been said but as you can probably tell, I am a fan of this universe and Clerks II is one of my favorites

Time has passed since we left the View Askewinverse with Clerks II, the world has changed (both inside the movie and outside the movie), Kevin Smith was trying to get Clerks III and Mallrats 2 off the ground but kept falling through. Then he had a massive heart attack. After he recovered, he announced he would be going back to the View Askewinverse with a new Jay and Silent Bob movie. And let me tell you. It was worth the wait. The writing feels like he never left, but at the same time he also evolved as a filmmaker. This movie has the humor you expect from these movies yet the amount of heart and emotion he put into this one, really packs a punch. The plot is the same as Jay and Silent Bob Strike Back, they even use a lot of the same jokes as before and a lot of fourth wall breaking and inside jokes, but there is so much new stuff and emotional moments between these characters into a well-made flick that’s fun for the older Askewniverse fans, and also helps bring in some new ones. You can see the evolution and growth between the characters in the movie and Kevin Smith himself.

And these movies have made such an impact on my life personally, it was something I could relate to. Their friends were my friends.

So, if you are stuck at home with everything going on in the world today and looking to have a good time, check out these movies! Of course, I recommend watching them all but if you only have time for one or two of them, that’s fine. You don’t necessarily HAVE to see all the films in order to understand what’s going in the others. But it does help when it comes to a lot of humor. Which is your favorite of the following films:
Clerks
Mallrats
Chasing Amy
Dogma
Jay and Silent Bob Strike Back
Clerks II
Jay and Silent Bob Reboot

There was also some extra View Askew stuff you should check out including:
Clerks: The Animated Series
Jay and Silent Bob’s Super Groovy Cartoon Movie
Chasing Dogma (a comic taking place between Chasing Amy and Dogma)

Stephen Amell Makes It Clear, No More Arrowverse
Is it Too Much to Ask For? Possible Ashoka Tano Casting