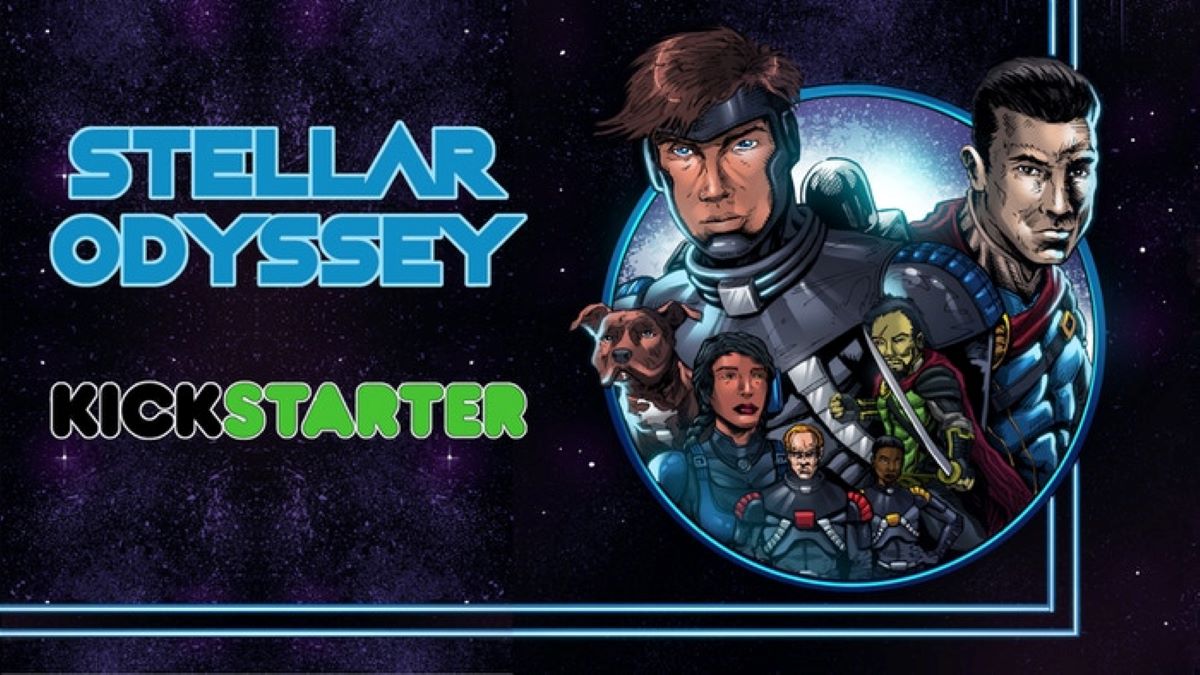 I knew that this would come eventually, no good ride lasts forever, but my experience reading Indie Books had been so great that it was hard to think there would ever be a point where I would read a book and not enjoy it. Sadly, this was not the case, and I finally have a book that unfortunately did not resonate with me as a reader. Despite all its promise and potential, Stellar Odyssey by Ray Marek III and his ceative team fails to live up to it’s fun name, and fantastic cover by not focusing in on a singular narrative and throwing far too much at an audience in his first issue for me to care.

There is an old idiom that I am sure everyone is aware of Don’t Judge a Book By Its Cover, and in the world of novels and literature, this rule is paramount and should not be broken. However, in comics, the cover is how you grab a reader’s initial interest. It should preview what the audience can expect from this book: it’s story, it’s art, the themes. A good cover represents all those things, and the cover of Stellar Odyssey is just that, a good cover of a much different book than what we got. We look at this cover and we see all of the main characters together center stage and Space serving as a beautiful backdrop and a gorgeous light blue logo with a space ship riding the tail of the final letter. I saw this book and was excited, and that excitement held for the first 5 pages, but then the book took a turn.

The book starts off with a story called “Fairwells” we are introduced to a few characters who are departing to go do some training to become space knights, and the character that seems to be the protagonist has been having some issues saying goodbye to a girl who I assume is his love interest. He then gets on his ship to leave, and this should be where are story begins. However, this is where it ends and we are introduced to a pair of Space Knights that briefly are mentioned in the first story, but we are no longer boarding a ship to go train to be space knights, instead we are hunting a nest of alien creatures that are allegedly posing a threat to a settlement. But again before this story has a chance to go much of anywhere, it ends and we go to the next story which I only remember because the name reminds me of an episode of Cowboy Bebop called “Vagabond Blues”, during which a bounty hunter type of guy is being hunted? I am not exactly sure. I am not going to bother going into the final story because I think I made my point.

I am sure you may have noticed that during my summation of the book, I included no character names. This was intentional. I did this because we got to know NONE of these characters. We are given brief snippets and are expected that these little vignettes should be enough to gauge interest, but it’s not, and what’s worse is that there doesn’t seem to be a narrative direction to bring all these characters together. The cover had all these cool and interesting characters stand together, side by side in a small circle, but then you read this book and they couldn’t be farther apart. It’s not even that they don’t appear in each other’s stories, they don’t even feel like they are in the same world. There is no narrative structure or flow, and as a result these disjointed fragments of a story fail to compell me to care, and so without looking at the comic, I can’t even tell you even one of their names, and that’s a shame because this book does have potential.

This book has what it needs to be a success, the art is great, and the colors are fantastic. The letterist showed up for work and has a great font style, but it’s always a massive risk when you have 3 writers working on stories in one book. The first story had my attention, and I was able to get behind the second story because one of the character’s appeared in the first, but jumping around to a new character every 5 pages with seemingly no narrative connection is not something that is going to capture an audience. Maybe this would have been better if they had released as a 200 some odd page graphic novel, and allowed each of these stories 15-20 pages and have actual character arcs that went full circle we’d be having a different conversation, but this isn’t a story of what ifs. This book has been presented as it is, and I found the content to be severely lacking.

I am sorry I cannot endorse Stellar Odyssey, I was ready to be swept off my feet into another Space Adventure to hold me over till I read the next issue of Terralympus, I was ready for another over the top scifi hit like what I’ve seen from writers like Dave Brink. However, that was not this. There are glimpses of something great here, it’s clear because there is so much care put in here. However, if you can’t get me to feel that passion through your characters in your FIRST issue, why would I return for a second? Stellar Odyssey can be found on Kickstarter and has already reached full funding. I wish them the best, and hopefully I am just being too picky because I don’t want to see an Indie Creator fail, but I certainly have my doubts.