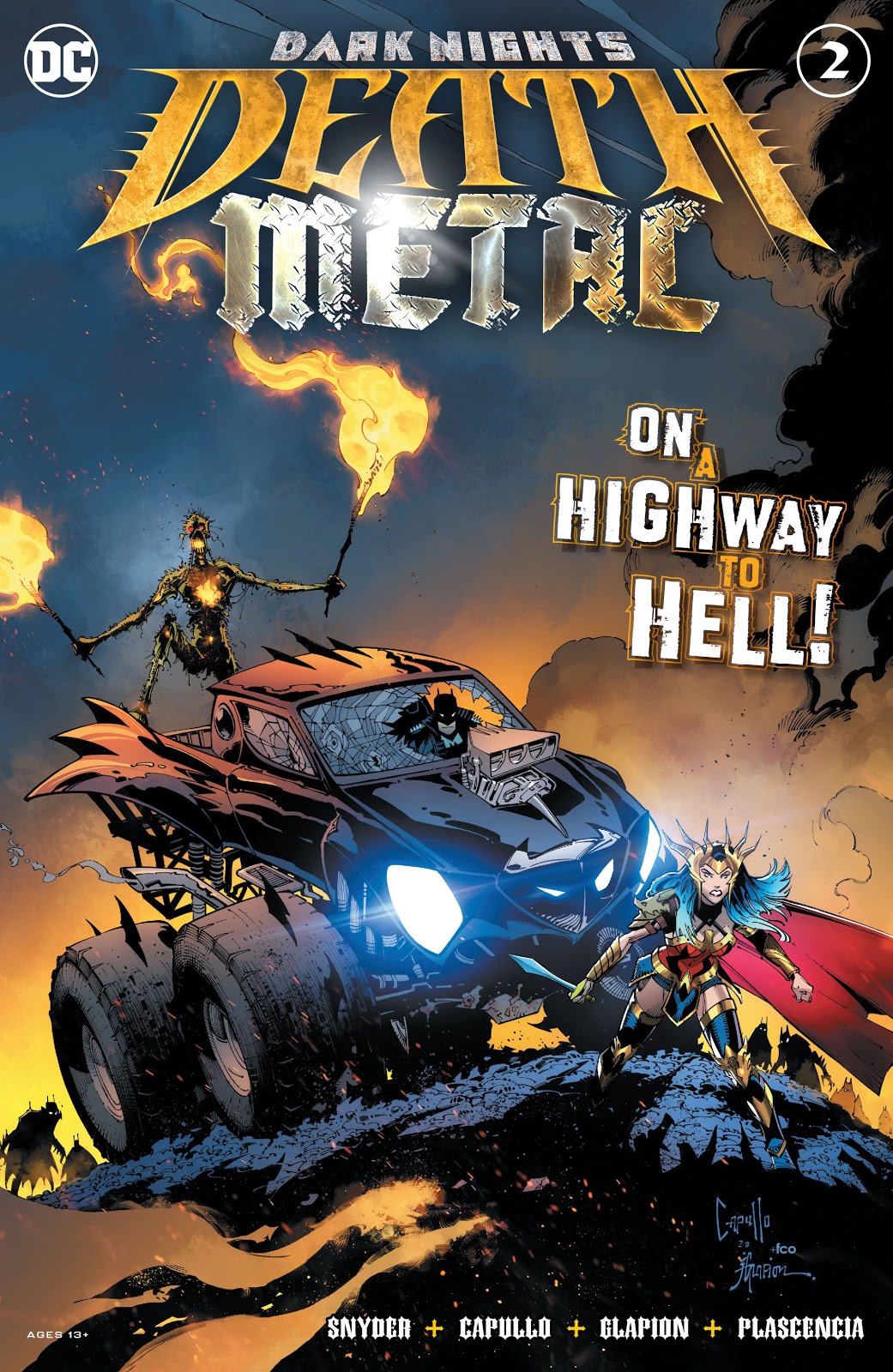 When Dark Nights: Metal first came out, it was by far one of the craziest events I’d ever read. It felt like a mix of Silver Age comic book weirdness and Metal albums. Well, with Death Metal ongoing, we see that it can only get crazier and more Metal than before. Scott Snyder and Greg Capullo have once again proven that they are one of Comics greatest teams ever, with the stakes at the highest it’s ever been and with enough craziness to make any fan wonder: “What the fuck is going on?!”

The issue picks up from last time, where Wonder Woman, Swamp Thing and Wally West are traveling across the Metalverse to meet up with Batman, who alongside with Jonah Hex, is assembling an army of dead heroes using his Black Lantern ring. Batman intended to create an army and stage small scale attacks against The Batman Who Laughs, but since Wonder Woman killed him, Batman now fears they may be facing against something they have no plan for. Wonder Woman insists on going into the Dark Multiverse to gather up enough Crisis Energy from all the major Crisis events, in order to combat Perpetua’s onslaught against the Multiverse.

Batman and Wonder Woman are in disagreement over the next course of action, seeing as how they lost the initial battle off-panel in between Justice/Doom War and Death Metal. Batman doesn’t want to reach too high and fail as hard, while Wonder Woman sees it as being hopeful in their reach towards finding a way to reverse all the chaos that’s ensued since.

Reunited with other heroes such as the JSA and Barry Allen, the group agrees that the best course of action is to siphon off Crisis energy and help to reform the Connective energy that connects all the different universes together. However, the armies of Perpetua are gearing up for their next step and it’s a insane, yet almost genius plot. With The Batman Who Laughs dead, his contingency would be to insert his brain into the body of what seemed to be a Bruce Wayne/Dr Manhattan body. With this new body, The Batman Who Laughs is now the Bat Manhattan Who Laughs, killing off his Batmen who helped form him and realizing with his new powers, he can see what the heroes intend to do. With his new Robin-King as his sidekick, Bat Manhattan decides to reform again into a new body, one that matches his evil desire to rule over everything. He simply becomes…

With the plan established and the heroes on the move, Wonder Woman asks Batman how they’re gonna carry out their plan. Getting into the Dark Multiverse isn’t going to be easy, especially with the armies of Perpetua everywhere. Batman simply tells Wonder Woman that an old friend of theirs has created something to assist. The Toymaker, who when we last saw had helped the Justice League defeat Mongul with their Battle Mech back in the first issue of Metal, has created possibly the coolest mech for the team. A combination of the DC Trinity in the form of a mech, it’ll help them leave their universe and dive into the darkness of chaos and horror that is th Dark Multiverse.

For only the second issue of a summer event, this was by far a pretty wild ride. It’s setting up a lot of what fans have been clamoring for, a potential resetting of everything within DC continuity into it’s proper place. Going back into past Crisis’ will give fans of old and new a chance to see those events from a different, more urgent perspective as well as clarifying why those events had such dramatic effects on the DC Multiverse as a whole. With the possibility of the Infinite Multiverse coming back, the adage of “Everything Matters” that DC has been sticking to may see every single event of DC history be brought back into continuity, allowing creators to work more freely and fans to establish their own canon and decide what matters most.

The issue is of course, beautifully drawn and colored, as anyone familar with Capullo will undoubtedly be aware of since he and Snyder dominated the DC market with their Batman run during the New 52. Snyder is at the top of his game, continuing to leave his mark on the DC landscape and placing himself alongside other legends of the artform. What will he deliver next is a mystery I cannot wait to see unveiled.

Let us know your thoughts on this issue? Are you enjoying so far? What are you hoping to see in the coming issues? Let us know in the comments!

Adapt or Die: Assuring Quality of the Mainline Industry of Comics Moving Forward
Moments From The Superman Comics That Would Be Great To Adapt On “Superman And Lois”