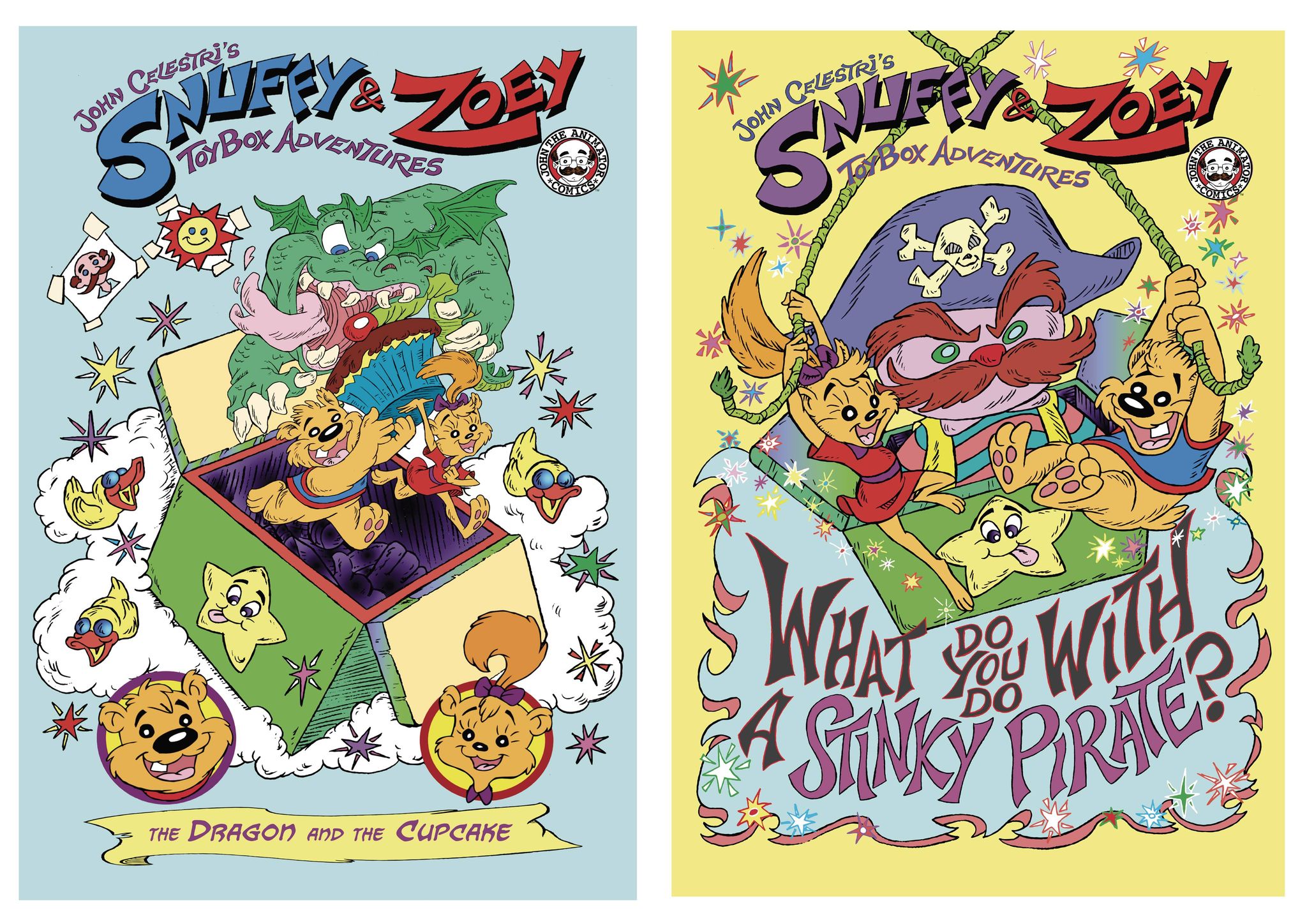 When you look back at the origins of comics, how they evolved from newspaper clipping strips to actual books like Action Comics, there was orignally a bit of something for everyone. Old Pulp stories like The Shadow or Dick Tracy were geared at a more adult audience, but there were light stories there for children as well, and when Superman marked the birth of the American Comicbook, they became the target audience as super fantastical characters so similar to mythic heroes of old began to flood the pages of their books with astonishing exploits that granted those younger readers a sense of escapism, and moreover, a way for their imaginations to sore with limitless possibility. In the current industry, that innocent desire to tell a story that a child can pick up and have that same escape, that same journey into imagination, has gone by the wayside. Instead Editors push darker stories in the vain of prolific icons like Alan Moore and Frank Miller, and so the audience that comics had once fostered to love the medium and grow with it, got abandoned. Somewhere along the way, comicbooks forgot about the kids. Enter the hero of our story: John Celestri.

John has always been a hero for most of us, but like many real heroes of the industry, went unsung. However, that fame was nowhere near as important as the work he did as an animator. I recently had a chance to talk with John and to give you guys an idea of just how much John has touched all our lives through the work he has done:

I started at Tubby the Tuba, and then went onto Raggedy Anne and Andy, all of the early Nelvana half-hours, then Rock & Rule, and a number of little things like Strawberry Shortcake, then I went over to Bluth’s for Dragon’s Lair and Space Ace, then went to Filmation for the She-Ra and He-Man shows,…OH and the Star Wars Holiday Special (John was the first person EVER to draw and only to ever animate Iconic Star Wars Rogue: Boba Fett).

John has so many other credits, and frankly to list them all would probably take a whole other article itself, however, as awesome as it was to talk about the influence that John has had on most of our collective lives as nerds, John and I were chatting for a specific reason. As I mentioned, the Industry of Comics has completely shifted away from what used to be their core audience: children. Recognizing this as a problem, John decided to use this chapter of his life to dedicate towards making comics for that left behind audience. John decided to make comics for children, and with his books Snuffy and Zoey and Mega Moose being marketed for ages 4-7 and 8-12, I thought it would be good to get that insight from John as to why he went that direction.

Well my natural drawing style is much more appealing and innocent in the look… Looking at the Industry… Looking at Comic Books, every thing looks like it’s aimed at TVMA… Liberal or Conservative it is not very friendly for kids who have not reached puberty. And Even the Material that IS aimed at that age group of 12 years old and under, it still has kind of a snarky, you know, 4th wall, wink- wink nudge- nudge, trying to dig something in for the adults and for it to go over kids’ heads. It’s not real, It’s not Honest... Now what you don’t have is from 4 to 12 year olds and there is nothing for them to take up the actual habit or appreciation for stories that can be told on their level. That’s why I decided “okay, I’m going to approach it from that point of view” because I know how to do that. Most books I see and Comic Production companies are aimed at kids that are 13 plus to 14 plus, there is at least an opportunity for someone like myself to be somewhat of a Johnny Appleseed and start laying down seeds for potential future audiences.

Honestly talking with John about this side of the industry and how it has sadly moved away from that market, was really intriguing. However, as a parent myself of a 2 year old, I started asking about John’s books and the content that was inside of them. A lot of books for kids are tailored to have certain themes and lessons. That’s not necessarily a bad thing, that’s not the purpose of John’s book Snuffy and Zoe, instead John wants to provide an escape for young readers that inspires creativity and imagination:

No there are no lessons, this is not educational. And the only education about it, is learning that you can create and develop your own entertainment. There are 2 Books ‘The Dragon and a Cupcake’ and ‘What Do You Do With a Stinky Pirate’… The thing about is that you have youngsters and they have a toybox. Snuffy and Zoe, when they get bored, they go into a toybox, and that’s their entry into the world of their imagination. That’s where they play, and do all of those various things. The have to make up their own games. They have to say “okay, well what are we going to do here?” And that’s what these stories are… What happens is that they go in, and even though they are in danger, they’re not in danger. You’ll see at the end how they get out of their problem, but it’s because they are imaginative and it’s their imagination, and that’s what it is.

As great as the stories of Snuffy and Zoe seem to be, John goes even a step further in cultivating that creativity and imagination. John has made available 2 coloring books! One that’s just a standard coloring book with moments from the book, and the other that offers drawing tutorials on how to draw: from the basics of drawing a simple face, to drawing the characters from the book themselves! But as much as I could gush about this project in particular, Snuffy and Zoe are not the only project John has available on his campaign. ENTER MEGA MOOSE!

Mega Moose is yet another project that has me excited as it takes notes from classic golden age super heroes like Captain Marvel (Bill Batson, Original type) and Mighty Mouse! Mega Moose is aimed at the audience of 8-12 and looks to be a treat! Nicky Nardson is a bullied kid and nothing seems to go right for him. That is until a Wizard bestows on him a special power of transformation to aid him in his struggle agains bullies, and supervillains of all types! With the tickle of his nose from a magic feather, Nicky’s sneeze triggers the transformation of a Minotaur style creature with the head of a Moose, with all the powers of the animal kingdom. Thus Mighty Moose was born!

Mega Moose has the touch of that classic Golden and Silver Age fun that has been sorely lacking in current super books, however, when you look at this project you can tell just how much this project means to John. When I asked John about the antibullying themes of the book, he really opened up about how his own experiences led to the creation of this work:

I’v always liked Captain Marvel, I got a nice collection of original comics. But the reason I did this- okay, so I was bullied as a kid. So as a child, and this goes back to when I was very young, I would dream I was Mighty Mouse. I didn’t really have access to Captain Marvel because I couldn’t read yet, and at the time Captain Marvel wasn’t being pushed out anymore. So what happened was that as an adult, I said “okay, I know what it’s like to be bullied, and I know wish fulfillment -and that is one of the big things, that’s one of the big reasons Harry Potter is so popular. This wish fulfilment to be able to do these- to have powers.

So I really wanted to do something that harkons back, but has a twist to it in someway shape or form. I had the wizard, who was one of my earliest characters that I did as an animator, as a comicbook artist, I drew a nerdy character with glasses…so I took those two characters and set them into this school, kind of an academy school in- I don’t know where… It reminds me of this combination of that Harry Potter English school thing, but I went to school in New York City that was a Jesuit Military Day school called Xavier, that had JROTC… So my memories of that kind of school, a throw in of my various wantings of Shazam, and set it in some mythical place... So there is the bullying aspect, but there’s also the aspect that even though people see Nicky Nardson turn into Mega Moose, they don’t believe it because they think it’s Special Effects. So he’s frustrated that noone believes that he can do these things.

I really got a kick out of that last bit. It’s one of those things where kids at that age will literally say anything to get attention, no matter how outlandish and you always hear the parents saying things like: “What did I tell you about lying!” And here’s this kid who literally does the fantastical, and not only does he claim it, but he shows it, and yet people still don’t believe him and write hime off. It has so much charm and when you add in the layer of John’s own experiences that he’s put into this story, it possibilities are really exciting to think about.

John launched his campaign for Snuffy and Zoey and Mega Moose on September 1st! He currently has 6 perk tiers for all the books with the top limited tier collecting all the books (Both “Snuffy and Zoe” books, the coloring books, Mega Moose, Mega Moose Ashcan and to top it all off, a SIGNED sketch of Boba Fett on an 8×11 paper) for $95 plus shipping! Be sure to check out his work to help support this beautiful endeavor to not only bring innocence back to this industry, but foster a next generation of comic readers with these beautiful stories that spur the creativity of our children. We need more creators like John Celestri, and the best way to open that door is by ensuring that he succeeds. Thanks for Reading, and thanks to John for taking the time to speak with me about his projects and his career in the industry! I look forward to a bright future in comics for not only John, but the children who get to experience his books.