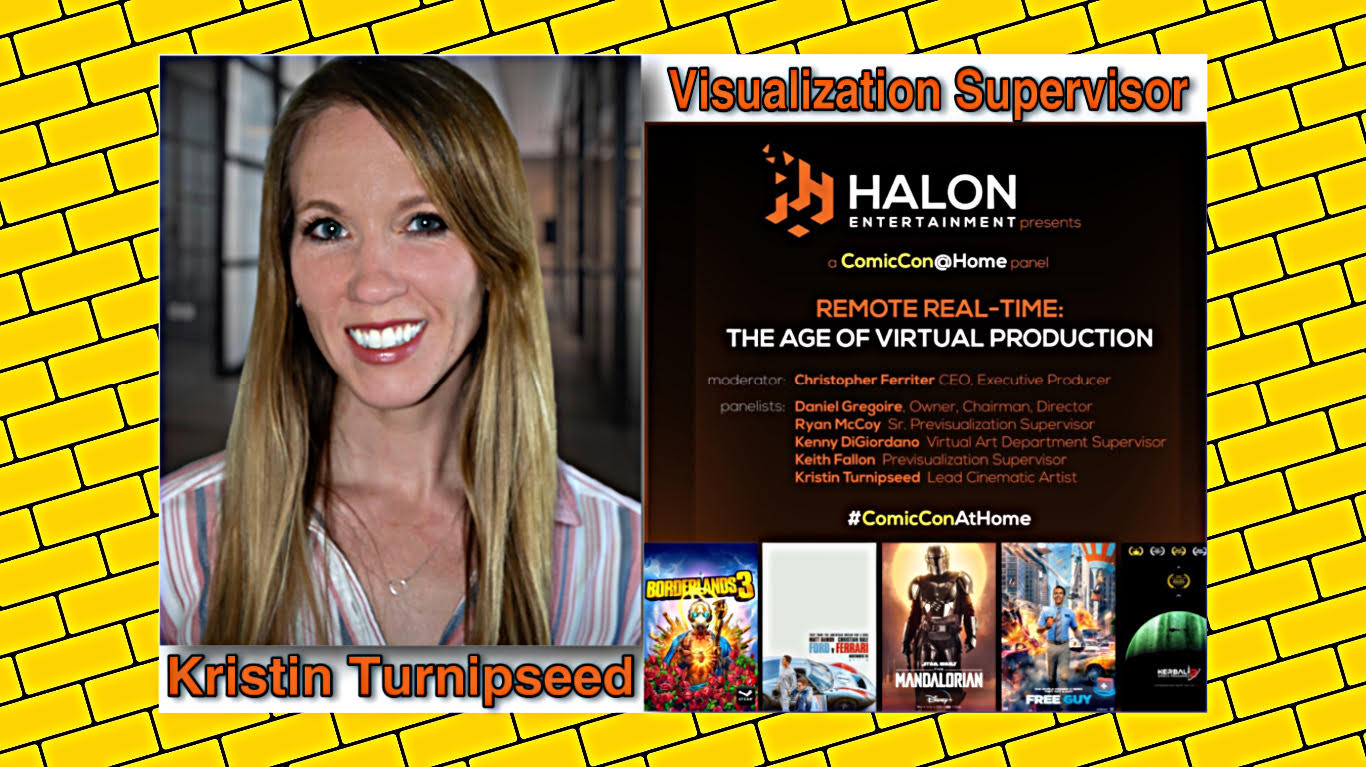 Comic Con at Home went off without a hitch this past weekend (July 23-26), as the incredible team at Comic-Con International put on a virtual show that’s now in the record books, literally! This past week I had the privilege of interviewing one of the most talented creators at Halon Entertainment, Kristin Turnipseed, who is the Visualization Supervisor. Kristin has been at Halon for five years and is part of the pioneering team at Halon responsible for the visuals behind many notable pop culture films, shows, and video games. Some of the projects they’ve worked on over the years and currently include: The Mandalorian, The Batman, Logan, Ford v Ferrari, Borderlands 3, God of War, and the soon to be released, Free Guy starring Ryan Reynolds.

On Friday, July 24, 2020 (ComicCon@Home day 2), Halon hosted a panel with its top executives and creatives to discuss virtual production, the impact of COVID-19, and the challenges of transitioning to a completely remote workforce, as well as how Hollywood can proceed with production during the pandemic utilizing real-time workflows. The panel was incredibly informative and exciting as fans got chance to learn and look deeper into the effects and visuals that surround some of their favorite films, shows, and video games.

During our candid interview, Kristin and I discussed her time at Halon, what skills and talents she brings to Halon, and what excites her most about her work. Kristin also reveals during the interview how working in the pandemic and having to switch to an all virtual workforce (while difficult for many) has had minimal challenges, despite what people may believe. And there’s a reason why. We discussed but a few of the films, shows, and games Kristin has had her hand in and I must say she is enormously talented; I cannot say that enough. The proof is in her work and her resume. She’s done visual work on films such as Aquaman, Spider-man: Homecoming, Ad Astra, War for the Planet of the Apes, Pacific Rim: Uprising, and the list goes on. Kristin explained a scene she worked on in Ad Astra, which stars Brad Pitt, and gives details on the work that went into a scene set in space.

When asked about one of her most seminal moments in her career, Kristin described what it feels like to see her work in the final product on screen. She gushed especially about a scene in the 20th Century Studios film, Logan, starring Hugh Jackman, and how she felt when visuals she worked on ended up in the final cut of the film. Kristin talked about how she still has archival footage of herself setting up for the scene in question.

Kristin is someone who is passionate about what she does and it shows. She lights up talking about the work that goes into creating visuals, art and design. At Halon, she uses her talent to continue to grow and provide the best quality of work she can for all to enjoy. Fans will be able to see what I’m referring to as more details are revealed in the exclusive interview. For those who missed the Halon Entertainment panel at #ComicCon@Home, you can watch anytime on YouTube .

Watch the full interview with Kristin Turnipseed below:

Elysian Fields #0 Review: A look into the World of Ancient Heroes
The Line Between Accuracy And Narrative: ‘7500’ Review