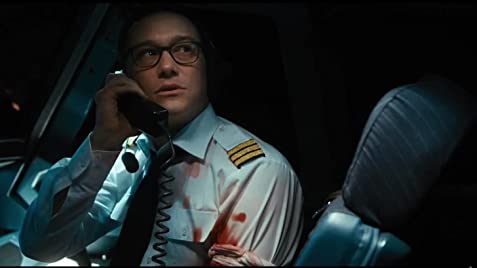 If there is one genre that many films have abosultely struggled with is any theme essentially involving a plot with aircraft. For whatever reason, from Hijack, Passenger 57, and Flightplan, to Air Force One, Die Hard 2, and Flight, movies have struggled to add any realistic approach or groundedness to airline procedures. This is essential and for good reason, as the average outbound/inbound system has become so precise it may give the impression of excitement, but becomes lacsidasical as time goes on and would leave the audience feelkng bored or impatient; this is both a strength and weakness in Writer/Director, Patrick Vollrath’s, feature-length debut, 7500.

With star Joseph Gordon-Levitt, who essentially is the main focus of the runtime, 7500 deliberately takes it’s time setting up a tense sequence of events that unfortunately are unsustainable throughout as the realistic perspective of the film hinders the narrative in the final twenty minutes. The plot is predictably simple; terrorist hijackers attempt to storm the cockpit of a European passenger aircraft and seize control, following their attempts, the First Officer (Gordon-Levitt) must survive and safely land the plane before the terrorists can proceed further, hence the use of the “unlawful interference” alert ‘7500’ as the title.

The film opens with a sequential montage of security footage detailing the impending act of terrorism. While we don’t directly see any immedietly illegal acts, eagle-eyed viewers will see an exchange of items following the obstruction of the concourse washrooms. Following the titles we are introduced to Captain Michael Lutzmann (Carlo Kitzlinger) and First Officer Tobias Ellis as they prepare for their departure from Berlin. Watching 7500 with a Boeing 787 Dreamliner Captain allowed me to embrace the specific details Vollrath was attentative to. The fuel checks, and weight and balance reviews were an added piece that not just allows the characters of Michael and Tobias to interact freely, but to build slowly to the almost-to-quiet amosphere. Vollrath also knew when to cut at moments that would have slowed down the film without adding any effect, such as skipping a pushback sequence.

Once the aircraft has successfully begun its ascent, it does not take long for the initial attacks on the cockpit to take place. The violence is eerily brutal, and, once again, the addition of a minimal soundtrack with no distinctive theme only adds to the severity of the situation. Tobias is forced into incredibly complex decisions that force Levitt to really push the ability of his acting, which, despite protocol, would make you question the situation you would be placed under. However, the cruxt of the issues in the film come from these specific sequences in which Vollrath sacrifices common sense for runtime. I will be fair and say that I believe the placement of having the plot take place over European airspace as opposed to North American would be the access to the Berlin and Hannover airports, that being said, the idea that Tobias would have to take close to twenty minutes to land at mid-altitude in the middle of Europe is a bit harder to come to terms with as opposed to the spacing you would see with Canadian airspace. Tobias also makes very curious decisions with a couple of the terrorists that are difficult to agree with given the circumstance.

Besides Gordon-Levitt, another brightspot in the film is Omid Memar who plays the youngest of the terrorist group, Vedat. Vedat is given the majority of the development in the latter-half of the film and the young actor is really given a chance to show his on-screen abilities and chemistry with a presence such as Joseph Gordon-Levitt.

As an airline film, it is arguably one of the most accurate displays you’ll ever see, as a story, it is rather weak. But I felt that was distracting from the point; 7500 is a film that accurately depicts the procedures of passenger airliners whilst showcasing the abilities of modern aircraft simulators. The film is unfortunately filled with poor decision on behalf of our protagonist, and the overplayed casting of the terrorists may come across as potentially controversial. Patrick Vollrath impressively conveys tension and pacing for a debut feature, however I would enjoy seeing a narratively-driven film from him.